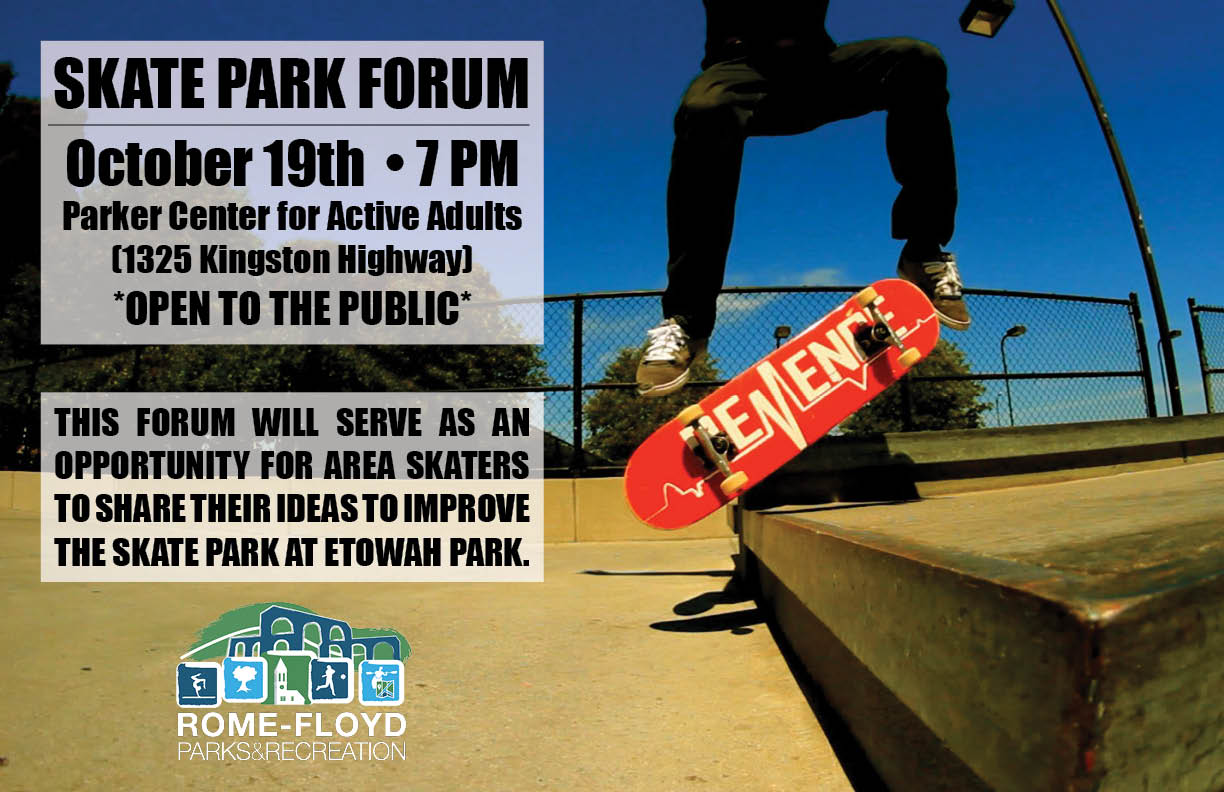 Area skaters weigh in on improvements they would like to see at the park, and encourage other skaters to attend.

When Mark Green saw the half pipe in shambles at Etowah Park’s skate park last week, his gut reaction was excitement.

“I’m so optimistic, I was thinking they’re going to build a new one,” he said. “Then, after talking to the demolition crew foreman, I got the impression it was gone for good. It was definitely in bad shape and in need of a rebuild.”

But Green, who is 46 and has been skating since he was 13, wasn’t far off the mark. With the intention to enhance the park for the skating community, Rome-Floyd Parks and Recreation will host a Town Hall-style community meeting at the Charles C. Parker Center at Etowah Park on October 19th at 7 p.m., to get suggestions and feedback from local skate enthusiasts about features they would like to see at the skate park in the future.

Kevin Cowling, director of Rome-Floyd Parks and Recreation, said he, along with Parks Superintendent Todd Wofford, have been working closely with Justin Fortenberry, owner of Skatelife Boarding Company on Broad Street, regarding park improvement ideas.

“It’s an important issue, and concerns a segment of the population we serve,” Cowling said. “Any time something is in disrepair and needs to be updated, we have to address that need.”

Fortenberry has worked on building and maintaining a relationship with the recreation department for years as a representative of the local skate community. He said Parks and Recreation officials contacted him a few weeks ago and asked his opinion about the half pipe.

“They’d taken the sheet metal off and it was all rotted, and they asked me if I thought they should replace it or just get rid of it. I said just get rid of it,” he said. “That type of skateboarding isn’t as big as it was 20 years ago when the park was built.”

It’s important to note how the sport has evolved over the years, Fortenberry said, when planning to enhance and improve the current facility.

“We’re definitely asking that anyone who has input to come to the meeting,” he added. “This is your chance to get your voice heard.”

The skate community has plenty of ideas, but Fortenberry said he is trying to keep the vision for the skate park as realistic as possible.

“Resurfacing the park would be a great thing to do; it would make the park feel like a brand new place,” he said. “The asphalt has worn down over time and it’s rough. Ultimately a new park would be perfect, but it all depends on the money. If we can get enough funding to build a new park, that would be great, but if not, we can work with what we have and build off of that.  We can make small additions to the park to make it more fun and accessible.”

Cowling said there are different avenues to explore as far as funding for the project, including grants. He said he plans to examine the short and long term goals for the park after the October 19th meeting. Once the ideas are presented and prioritized, Cowling said he’ll devise a proposal and look into what can be done sooner, and what needs to be done later.

“It could end up being a three, five to seven or even 10-year plan,” Cowling explained. “And when we come to those points in the plan, we’ll see where we are in the current plan, what needs to continue to be pursued and what doesn’t need to be pursued.  In five years, the skate world could be different than what it is today.”

A safe place to skate

The skate park at Etowah Park is an important leisure facility for local skateboarders of all ages who aren’t able to travel to other towns with skate parks, Green said.

“I think it’s great they’re even having this meeting in the first place,” said Green. “The park is very minimal, but at least it’s something for the kids to skate on. I think there’s a strong skate community in Rome and they are just forced to go somewhere else to practice.”

Fortenberry said about 30 people regularly skate at the park and even more people drive from surrounding communities to use the park as well.

“I would encourage people who are concerned with our skate park’s improvements to visit (other skate parks) and see the buzz around these public parks. It’s really amazing. These other parks have street courses, flow bowls and pools.”

The skate park at Etowah Park has a street course, and Green said he would love to see a nice concrete park added.

“But even a nice new ramp that’s weatherproof would be awesome,” Green said.

“It’s not a bad park,” Fortenberry said. “It’s home, I skate there all the time. I love that place. It’s just we could a lot more, we could have a better place to skate.”